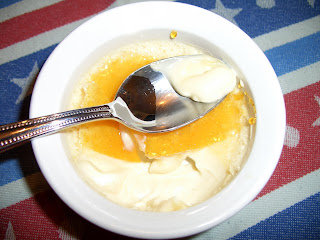 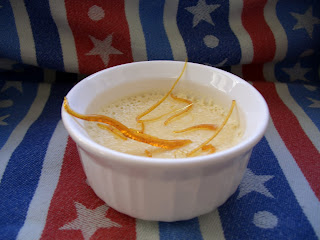 I had to move mountains to make this weeks TWD recipe. I was so excited to see that Creme Brulee was chosen because that meant I finally had a reason to buy a kitchen torch. Anyone who knows me knows that I am accident prone in the kitchen. I am constantly cutting myself or burning myself or a combination of the two. Hmmmm... culinary school should be interesting!
Anyway, like I said, I was excited! I immediately logged on the internet and ordered special creme brulee dishes and a kitchen torch. When Nathan called me later that week I told him all about how I finally was getting a torch. He chuckled and said, "Are you sure that's a good idea?". Yes, my husband has a sense of humor about my ability to hurt myself in the kitchen! I told him not to worry but he still had some reservations about me being alone with a blowtorch! Then he mentioned that he didn't think butane could be shipped APO. I shrugged it off.
Well... sure enough, it can't be shipped. No worries. I still had the dishes on the way and I was certain I could find a blowtorch on the economy. I asked a German friend where I could find one and she pointed in the right direction. Life got in the way, though, and I never made it out to look for one. Again, no big deal as Dorie says you can use the broiler.
Fast forward to Friday and there are no creme brulee dishes in the mail. Someone really didn't want me making this recipe! I decided I would just get some ramekins from the PX and work with those. Then more hope came my way! My friend Erica called me on Saturday and said she found a blowtorch and asked if I wanted her to get it. WOO HOO! So, the torch would be on the way to my house shortly. So I went ahead and got the ramekins from the PX and set out to make creme brulee.
Well... the store had the torch but no gas. :( At least now I know where I can get it from! (Thanks so much Erica for searching for me!) Now I had no torch and ramekins that said "NO BROILER". This really was getting frustrating!
Luckily, a wonderful TWDer (SweetCharity) suggested caramelizing sugar on the stove top and spooning it onto the custard. GENIUS! I was so excited that I had another option.
I made traditional creme brulee and orange/cardamom creme brulee. I had to cook them for almost 2 hours in order for them to set since the ramekins were deeper than the ones intended for creme brulee.
Even though I had so many issues the creme brulee was fantastic! Monica and I preferred the orange; Erica prefered the traditional. Either way, they were both gone! I am so glad I didn't give up and that I was able to make this. It was so incredibly delicious and I will be making it again... once I get everything here!
Thanks for a wonderful recipe choice, Mari. The recipe can be found at her blog (Mevrouw Cupcake). Don't forget to check out the TWD blogroll!

Lucky you to get a torch! I should have carmelized the sugar on the stove top it didn't work to well in the broiler. Great job!

Wow, I'm impressed you went through all of that for this recipe. It sounds like it turned out quite well though, so it was probably worth it!

I swear, it's like someone was sabotaging me this week as well! Glad you pulled through it and finished the brulee!

Wow. Props for your perseverance. All that work probably made the creme brulee taste even sweeter right? I totally have to try that sugar on the stovetop thing. I think orange+cardamom combo is in my future next! So glad everyone liked it! Great job!
Clara @ iheartfood4thought

Oh my! You are getting creative there! I like it! A lot! Since I also used ramekins, it did take longer as well. You are such a trooper to make BOTH the traditional and orange/cardamom. Fantastic job!

You deserve the award for perseverance this week! They look pretty good. Great idea to carmelize the sugar on the stove. The brulees look like they are topped with art!

orange and cardamon.. just the way i had it in spain while i was there on holiday. It was very refreshing.. part of a very beautiful memory. Glad things worked out for you. and don't worry, i'm a clutz in the kitchen too! my bf refuses to let me handle knives because of that reason. haha.

You certainly were determined in your pursuit of the torch. The Creme Brulee looks lovely and smooth. Have just read that you can order a torch through Bed Bath and Beyond - even clumsy me will maybe try now.