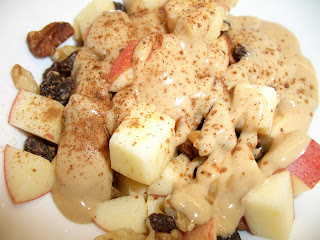 It's been a long day so this will be short and sweet. Here is an absolutely DELICIOUS breakfast. YUM YUM YUM! I had it two days in a row and would make it again tomorrow, but I am out of apples! I found the recipe at Veggie Terrain.

*Notes: I used peanut butter since the commissary doesn't carry cashew butter. They also don't carry mace, so I used nutmeg instead. The second time I made this I added some shredded coconut. YUM!

yummy this looks delicious. kinda reminds me of waldorf salad - which i love!

Oh yum..this looks great!
I actually have a jar of unopened cashew butter that I bought having no idea on what I was going to do with it....well now I know!
Thanks for your comment on my oreo turkeys..they were fun!