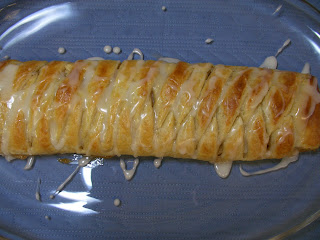 This is officially the BEST baked good I have ever made! And that is saying a lot because I bake a ton. This danish was sent straight from heaven! It was amazingly, over-the-top delicious!

The recipe for this danish was absolute perfection! The vanilla beans just put it over the top for me! I cannot stop gushing about it! Unfortunately, being that it is 4 am, I am unable to come up with the right words!

The recipe makes 2 large braids, but I chose to make one large braid and 2 smaller ones. For the small ones, I made one with the apple filling provided in the recipe (DIVINE!) and a cream cheese filling in the other. The large one was filled with cream cheese and strawberries, however I don't have pics of that one because I gave it to Monica to serve to her guests flying in from the states. She promised to take pics of it, so I will update the post on Saturday with new pics!

While the recipe seems long and complex, this was actually a breeze to make. I had no issues with it and was very pleased with the results. It was a tad time consuming, but that was mostly attributed to rest time for the dough.

This was the June 2008 challenge hosted by Kelly of Sass and Veracity and Ben of What's Cookin'? (recipes can be found at their blogs). A belated thanks for an awesome challenge!!! 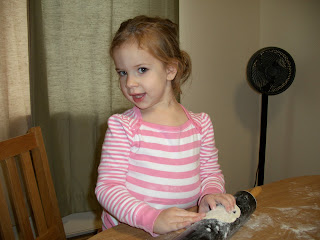 Anya rolling out her own pastry 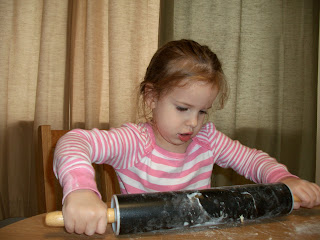 She loves helping me cook! 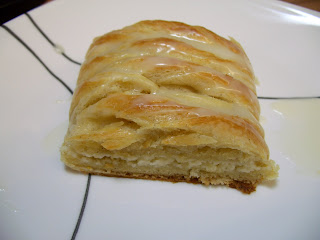 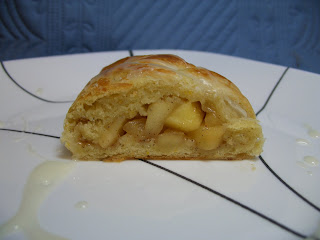 Thanks for the reminder of how much I loved this danish - especially the apple filling. Looks delicious!

I was floored when I first saw all of these glorious danishes a few weeks ago. And I'm still impressed by it! It look great and I'm sure it was delicious and worth every effort. Great job.

Christine, this was the challenge that made me want to join DB. I need to go back and make it. Yours looks yummy and what a gorgeous helper!

It looks wonderful. When I made it, it was my first DB challenge, and seeing this has inspired me to make it again... soooo yum.

Yum! That looks awesome. I missed out on that month's challenge so I need to have a make-up day. ;> You have a cute little helper! I have one at my house, as well. Lots of fun!

Your danish looks SO GOOD! We've made lots of great challenge recipes but this was one of the best!

Your daughter is adorable! :)

That looks incredible! I just joined DB's but you've inspired me to go back and give this one a try. Your daughter looks like a sweetie!
Arika
My Yummy Life

This was my favorite DB challenge. I've made 4 braids since it was so good. Your daughter is so cute with that giant rolling pin!

Beautiful! Nice job! I loved this challenge too! It was one of my favorites!

Your braid is gorgeous! The dough looks so flaky and light. And your daughter is a cutie too - good job getting her involved!

It looks really great! I didn't make it the month of the challenge, but I'm planning on it once the weather cools off.

Cute pictures of your daughter!

As you wrote it on the forum: pure heaven, I agree with you. Nice job!

Awesome job!!! I agree, it was among my top 2 Daring Bakers recipes (my other fave was Dorie's Perfect Party Cake).

Great job on yours, it looks like perfection. I loved this challenge too, because of the great recipe coupled with room for creativity.