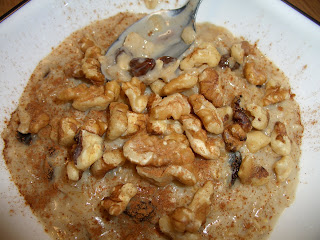 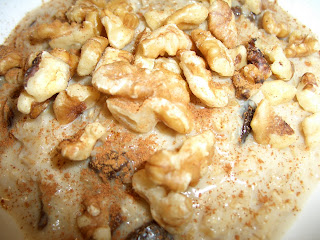 Mmmm... oatmeal! It has been getting cold here and a warm bowl of oatmeal in the morning has been so comforting. Of course, I get bored with the same old bowl of oatmeal with a little brown sugar sprinkled in. So, I turned to the wonderful world of food blogs and I wasn't disappointed. I found some great oatmeal recipes.

This week I have tried two; Oatmeal Raisin Cookie Oatmeal from Veggie Terrain and Vanilla Bean Oatmeal from Hot Off The Garlic Press. Both were amazing!

The raisin cookie oatmeal was out of this world! I loved how the walnuts provided some crunch and the cinnamon and nutmeg just highlighted the oatmeal. It really did taste like a cookie! So good!

The vanilla bean oatmeal was also great! It was more subdued, but not in a bad way. It had that classic vanilla flavor. If you think it is too expensive to use a vanilla bean for oatmeal, check out EBay! I didn't even think you could order vanilla beans on EBay, but you can and I did - for a heck of a lot cheaper than at the grocery store! Also, you could just use vanilla extract for the oatmeal, but I LOVE vanilla beans! I didn't take a picture of this oatmeal because it just looks like a plain bowl of oatmeal. But, I promise you, the flavor is anything but plain!!!

I will be trying another oatmeal recipe soon, so keep an eye out for that!

After oatmeal has cooked, remove pan from heat & stir in vanilla & nutmeg. Next, stir brown sugar into oatmeal.

this looks delicious, i am going to have to try this!

i have an award for you on my blog cristine!

ooh...more recipes I'm gonna have to copy soon. My kids love oatmeal and I am so trying these!

The oatmeal raisin cookie oatmeal is all sorts of deliciousness - I am eating it as I type! Thanks!