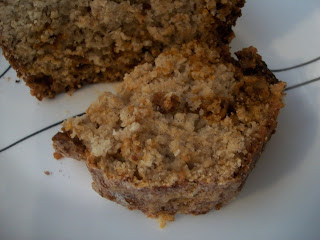 September is here and while it is still in the 90s here in El Paso, fall is coming and I am so excited! I can smell the spice breads and pumpkin recipes... they are on the way!
This cinnamon bread was calling my name and I was not disappointed. It is a mix between a quick bread and a yeast bread. There is yeast in the dough and it rises for an hour before mixing in the remaining ingredients and baking. I didn't read the recipe (major rule broken!) and accidentally mixed in the baking powder in the beginning but the bread still turned out great.
Enjoy!
Easy Cinnamon Bread
Taste of Home
3 cups flour
1/2 cup sugar
2 tsp active dry yeast
1 tsp ground cinnamon
1 tsp salt
1 cup warm milk (110-115 degrees)
1/4 cup butter, melted
1 egg
1 tsp baking powder
1 cup cinnamon chips
Cinnamon-Sugar
In a large bowl, combine flour, sugar, yeast, cinnamon, and salt. In a seperate bowl, whisk together milk, butter, and egg. Add milk mixture to flour mixture;beat until smooth. Cover and let rise 1 hour.
Stir baking powder and cinnamon chips into batter. Spoon into greased loaf pan and sprinkle with cinnamon sugar. Bake at 350 for 35-40 minutes or until a toothpick comes out clean. Cool bread 5 minutes before removing from pan.

So I'm not alone in breaking the rules? :) We are supposed to finally cool down to normal temps for Northern NY by this weekend (mid-60's). I am anxious for all the apple, pumpkin and butternut squash dishes we love!

I am SO ready for fall - and I just baked a snickerdoodle bundt cake this morning - because I'm craving those cinnamon/spice fall flavors!

I never knew how many people loved Fall till I started blogging. I thought I was just an oddball but I'm in the norm. Everyone seems to love Fall. Must ne the comfort foods and pumpkins!!!
This bread gets my attention! Bookmarked! (bookmarked only cuz the oven is broke, other wise it would be in the oven now!)