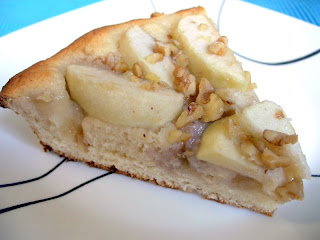 This week's TWD selection is Brioche Plum Tart and as you can tell from my post title, I opted to use apples instead. The recipe calls for 14 plums and there is no way I would be able to get 14 ripe plums from my commissary. I know I've said it before, but it really doesn't hurt to repeat it. The commissary here is not known for its great produce. Ahhh... moving stateside in September will definately have its benefits! :)

The tart is made with brioche instead of a traditional tart crust. I loved the subtle sweetness of the dough. The apples on top were soft but not mushy and paired well with the brioche. My only complaint about this is that it really needs to be eaten on the day it is made which isn't the easiest thing to do unless you eat it for every meal!

An awesome bonus to this recipe is that it helped me figure out what one of my favorite pastries is made of. There is an amazing almond bread/cake at the local bakery here in Baumholder and I could never quite figure out what it was made of. While eating this tart yesterday, my husband pointed out that the bread is very similar to the almond cake. So now I am on a mission to transform this brioche tart into the fantastic almond cake. Hopefully it will be similar so I won't have to miss it too much when we leave!

Thanks to Denise of Chez Us for choosing the Brioche Plum Tart. Head to her blog for the recipe!

The apples look delicious! I made it again this morning with just chocolate and walnuts. It's a very versatile crust. Glad you enjoyed!

Apples - what a great choice! I used chocolate, but you already knew that about me!

Isn't it nice when you figure those things out! I love apples and Im sure this was great with them. Nice looking tart!

What a heavenly looking dessert! Yours turned out beautifully :)

Love your use of apples in this one!

Had I had the courage to play with yeast (and maybe get rock hard dough as usual) I would definatly have done like you and made it apple. Somehow that recipe just sreamed apples to me. But nah, I simply don't risk it anymore... so I made last year's summer fruit galette.

Nicely done, and a very good choice of toping! YUM!

Your tart looks wonderful. I love that you used apples. YUM.

I like your new blog page . . it's so summery and cute!

Back to your apple tart, great adaptation! And look at that beauty! I want a slice!

Apples would be great in this! Yours looks amazing! I bet you're looking forward to getting back to a reliable food source!

I'm all for apples! This looks YUM!

Two crust in a row that were winners for you!

This must be lovely with apples. Great job!

I'm digging the apples in your tart. It looks picture perfect.

i came so close to trying this with apples- I really should have!! Your tart turned out so pretty! If I do this again I will try it with apples!

Cristine, I am so behind in my blog reading - just not enough time lately, but you are far from forgotten here!

I love when I find a recipe to make at home that reminds me of something I have bought before....makes the recipe a keeper! I will make sure to try this one since you like it so well! (I'll make sure to make it for an occasion or take it to work so it will get eaten up quickly!) ;-)