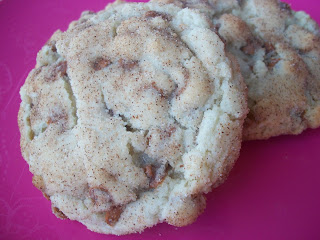 I love cinnamon chips. I know that they aren't available everywhere and that people stock up on them when they find them. That is what happened with me. I haven't seen the cinnamon chips in stock here in El Paso but had a nice stash in the freezer from Arizona. :) I like to ration them out so they last longer!

The only change I made was to omit the pecans and increase the cinnamon chips by 1/2 cup to compensate a bit.

In large bowl, beat 1 1/2 cups sugar, the butter, vanilla and eggs with electric mixer on medium speed, or mix with spoon, until creamy. Stir in flour, cream of tartar, baking soda and salt. Stir in cinnamon chips and pecans.

In small bowl, mix 2 tablespoons sugar and the cinnamon. Shape dough by 1/4 cupfuls into balls. Roll in sugar-cinnamon mixture. Place balls 3 inches apart on large cookie sheet (do not flatten).

Bake 13 to 17 minutes or until set and light brown. Immediately remove from cookie sheet to wire rack.

The Cookie Carnival is hosted by Tami of Tami's Kitchen Table Talk... stop by her blog to join in on the fun!

Yum, I love those cinnamon chips too and was so happy when I finally found a bag of them at an Albertson's. These cookies look like an ideal recipe for using them.

Oh gosh thank you, thank you..Samuel will love these! His fav. cookies are snickerdoodles so I know he's going to be all over these! Thanks for sharing!

I also love cinnamon chips but I don't think I can ever make such tasty cookies, I'm not good in cooking.

I love love the look of these

I buy my cinnamon chips on Amazon. Love the recipe...but I did make them with chopped walnuts and rolled them into balls before baking. While warm I rolled some in confectioners sugar and some in granulated sugar. They disappeared really fast.

I made these a few days ago. They are awesome. I LOVED the pecans. I only made them about half the size the recipe says, but those were still plenty big.
The only thing I thought was that they were too crispy. I'd make them again and just bake them less time.

The photo of your cookies makes me want to make these again since I didn't really get any the first time around. It looks great!

I'm with you - I'd normally leave out the pecans, but I put them in since I had some around to use up.

That looks delicious but when it comes to cooking, I’m having second thoughts, it’s just that I am not so good at it; I really don’t have the magic to make such tasty food. Good for you :)

I am sure my daughter will love this. Anyway, thank you for sharing this recipe. Right now, I am thinking on cooking this one on weekend.