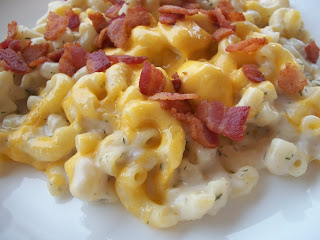 This mac and cheese is so good that I made it twice in one week. First, and I served it as a dinner and followed the recipe exactly as written. I loved the chunks of chicken and the wonderful flavor the dill gave it.

The second time I made it, I served it as a lunch and deviated from the recipe a bit. I omitted the chicken, doubled the bacon (and mixed it in with the noodles instead of using it as a topping), and used sour cream instead of cream of mushroom soup.

It tasted great both ways and I will definately be making this again. The sour cream and cream of mushroom soup can be used interchangeably without much difference. so that comes in handy in case you only have sour cream on hand!

Cook noodles; drain and set aside.

Cook bacon until crisp. Crumble and set aside.

Add chicken to bacon drippings and cook until done.

Bring to a boil and continue whisking until thick, about 2 minutes.

Add cheese and stir until melted. Mix in chicken, noodles, and spices.

bacon in mac and cheese ya you cant go wrong there!!! Yummy!

Looks yummy! I so wish we were eating carbs right now! lol. Its killing me.

you know a dish is good when a blogger makes it twice in one week! i remember seeing this one in cl, i can't wait to try it!

Great post and thanks for the advice! Very good!